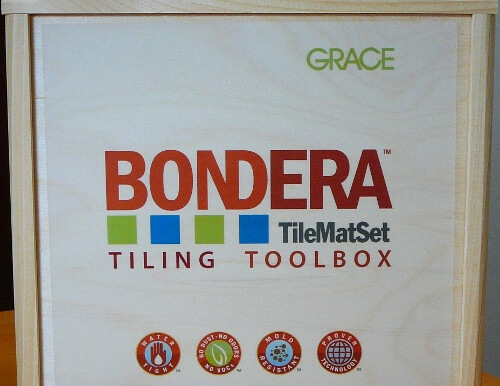 Not too long back, we were contacted by a PR firm that wanted to share a product that competes with SimpleMat called Bondera TileMatSet. Intrigued, we agreed to receive what Bondera calls a Tiling Toolbox. On the surface it might look like any other wooden box, but once opened up, we discovered that it contained not only some great material on what Bondera does, but it even comes with tiles and Bondera TileMatSet itself on the reverse side of the box! 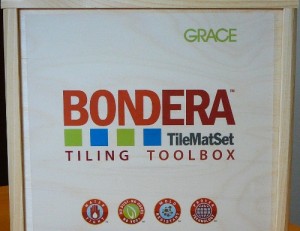 Described as pressure-sensitive adhesive on a roll that allows for an easier experience with tiling. Cleaner and faster than traditional methods, this is a product that can be used in much the same way as SimpleMat. The big difference is the use of the Bondera seam tape to repel moisture. Clearly, a big bonus for tiling bathrooms and backsplashes! 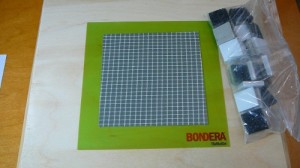 Based on what I have seen first hand, you bet it is. Due to its peal and stick nature, using Bondera to create great looking backsplashes is very easy to do.

Why is there also a seam tape product for Bondera?

Unlike other products, Bondera is apparently able to resist moisture when used with the seam tape. This translates into expanding beyond mere backsplashes, thus taking on bathroom tiling projects, even shower and bath surrounds.

Clean, flat and level. Those are your requirements. This translates into a laundry list of possibilities including plywood, drywall, cement, metal, laminate, the list goes on.

Can laid tiles be adjusted after being placed on the adhesive surface?

Yes, unlike other options out there. You can remove and replace the tile once applied. Realize however, that time is of the essence and the bond increases as the tile sits on the adhesive.

How long before I can grout?

Where can I get it?

Demonstration, seeing it in action?

In the coming days, we will be creating a short demonstration video where you will be able to see us apply the provided tiles from the Bondera toolbox to the reverse side with Bondera TileMatSet. The video will demonstrate both tile application, as well as removal. After this, we will be doing a second video in which we apply a full application of Bondera TileMatSet to a flat surface in which tiles will be applied and grouted. Stay tuned…

This website uses cookies to improve your experience while you navigate through the website. Out of these cookies, the cookies that are categorized as necessary are stored on your browser as they are essential for the working of basic functionalities of the website. We also use third-party cookies that help us analyze and understand how you use this website. These cookies will be stored in your browser only with your consent. You also have the option to opt-out of these cookies. But opting out of some of these cookies may have an effect on your browsing experience. The Home Makeover Diva is also a participant in the Amazon Services LLC Associates Program, an affiliate advertising program designed to provide a means for sites to earn advertising fees by advertising and linking to Amazon.com
Necessary Always Enabled
Necessary cookies are absolutely essential for the website to function properly. This category only includes cookies that ensures basic functionalities and security features of the website. These cookies do not store any personal information.
Non-necessary
Any cookies that may not be particularly necessary for the website to function and is used specifically to collect user personal data via analytics, ads, other embedded contents are termed as non-necessary cookies. It is mandatory to procure user consent prior to running these cookies on your website.
SAVE & ACCEPT