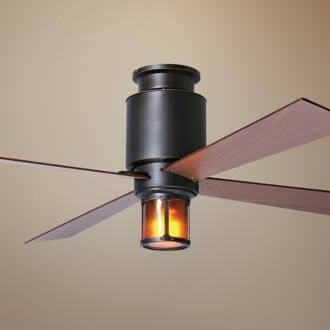 Today my friend Susan, challenged me to find three ceiling fans for small rooms that don’t look like something she would find in her grandmother’s house.

Well Susan, I accept your challenge! This is the problem with being the Home Makeover Diva, my friends exploit my design skills and expect me to know exactly what they want! So, after just a little bit of research here are the three ceiling fan designs I found that I think even Susan will approve of!

For the first fan, I chose the 42″ Period Arts Lapa Bronze Mahogany Mica Hugger Ceiling Fan. This hugger ceiling fan costs approximately $450 depending on where you order it from. This is a craftsman style ceiling fan with a Mica colored glass shade. It has four fan blades and definitely doesn’t look like anything to be found in Susan’s grandma’s house. 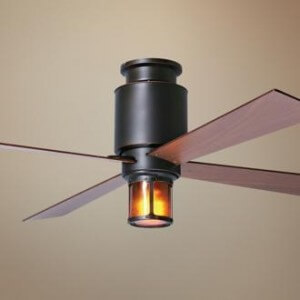 With the second fan, I went with the 42″ Craftmade Sopwith Camel Warplane Hugger Ceiling Fan. This warplane hugger ceiling fan costs around $225, once again depending on where you order it from. This is an interesting fan that looks like the propeller of a WWII warplane. This may not have been quite what Susan was looking for, but I thought it was definitely noteworthy nonetheless!

And lastly with our final fan, I decided on the 16″ Casa Vieja Esquire Rotational Head Ceiling Fan. This rotational head ceiling fan costs around $250, depending on where you order it from. This is a great fan if you want something more ornate and vintage looking. It is an elegant ceiling fan that would go equally great in a traditional or a rustic designed space because of its retro look. It looks like a traditional wire framed table fan and the fan head can be aimed in any direction you choose increasing the flow of cool air.

So you see, ones doesn’t have to go with the traditional boring ceiling fan when you are looking for a fixture to go in small rooms. This is the 21st century, there are many options out there! It just takes a little research.  And as a side note, any of these three ceiling fans would look great in Susan’s house!

This website uses cookies to improve your experience while you navigate through the website. Out of these cookies, the cookies that are categorized as necessary are stored on your browser as they are essential for the working of basic functionalities of the website. We also use third-party cookies that help us analyze and understand how you use this website. These cookies will be stored in your browser only with your consent. You also have the option to opt-out of these cookies. But opting out of some of these cookies may have an effect on your browsing experience. The Home Makeover Diva is also a participant in the Amazon Services LLC Associates Program, an affiliate advertising program designed to provide a means for sites to earn advertising fees by advertising and linking to Amazon.com
Necessary Always Enabled
Necessary cookies are absolutely essential for the website to function properly. This category only includes cookies that ensures basic functionalities and security features of the website. These cookies do not store any personal information.
Non-necessary
Any cookies that may not be particularly necessary for the website to function and is used specifically to collect user personal data via analytics, ads, other embedded contents are termed as non-necessary cookies. It is mandatory to procure user consent prior to running these cookies on your website.
SAVE & ACCEPT